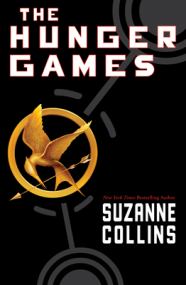 Katniss Everdeen, sixteen, lives with her mother and twelve-year-old sister Prim. The story is set in the future, in a land called Parem, a nation of twelve districts that rose from the ashes of an ancient area called North America long ago. It used to house thirteen districts, but a rebellion among the districts rose against the Capitol. This caused the Capitol to completely obliterate the thirteenth and instill the Hunger Games.

The annual Games call for two tributes, a boy and a girl between the ages of twelve and eighteen, to be pulled by lottery from each district. Then the twenty-four teens mustfight to the death on live television. The Games serve as punishment to the districts, a yearly reminder of their rebellion’s defeat. But what is worse punishment is the mandate to treat the initiation Reaping ceremony, when the lottery is chosen, like a holiday to be celebrated.

Katniss prays for herself at the Reaping not to be chosen, to avoid the gruesome, sure-to-be death sentence of the lottery. She has twenty slips with her name on them in the running, as the citizens have the option to buy one year’s worth of grain by putting in an extra slip with his or her name on it. She has been making this gamble to feed her family for years. No need to worry about her younger sister Prim, whose odds are so low with only one slip. But this year, against all odds, Prim’s name is chosen. Shocked, Katniss volunteers herself in her sister’s place and is launched into the Games.

Be warned, this book is not for the weak of heart: Katniss expands in detail on the misery and hollow cheeks of living in poverty, and the violence of the Games is unnerving. But the parallels between this future dystopia and our current state of affairs, with the demand for live television and the scary effects of balancing powers, make for the most disturbing elements of the book. A truly horrific and thoughtful pageturner, your older readers will root on Katniss and soak in the details of the Games and this new world, Parem.