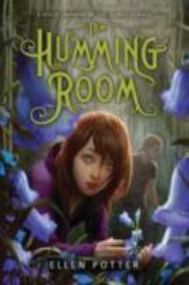 After her father and his girlfriend are murdered, under-developed but life-hardened Roo is sent to live with a rich uncle she never knew she had.

Uncle Emmett lives on Cough Island in a partly renovated tuberculosis sanitarium for children. Almost as soon as Roo arrives, he departs, leaving her in the care of the hired help with the injunction that Roo stay out of the East Wing. Rebellious Roo immediately begins to explore her eerie surroundings, trying to find the source of a tuneless humming she keeps hearing. If she believed in ghosts, Roo might think the hummer was a former inhabitant of the hospital, but she is sure the behavior is as human as her own. Readers, however, are not as convinced and will be held in suspense until, in a surprising discovery, Roo finds her cousin Phillip. Depressed after the death of his mother and unable to talk to his guilt-ridden father, Phillip does not leave his room and has become angry and unmanageable. The two personalities clash, but as they begin to find common ground, Phillip reveals that he feels his mother’s presence. In particular, he misses the garden he used to play in with her.

This presents Roo with a dilemma: she has found the walled-in garden that Uncle Emmett destroyed. With the help of Jack (who may or may not be the Faigne, a mysterious water creature), Roo has been trying to bring it back to life. Roo is not sure that Phillip will be able to keep the secret, but she finally decides to bring him to the atrium where he begins to thrive. Yet absentee Uncle Emmett has made the decision to send Phillip away . . .

It is up to Roo to help Uncle Emmett and Phillip move through their grief and mend their relationship. In the process, she, too, blooms and grows. Tinged with melancholy and hints of the supernatural, this atmospheric retelling of The Secret Garden, will be certain to hook children.  Many may well want to read The Secret Garden to compare the two tales.