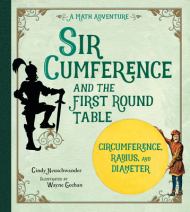 Sir Cumference and the First Round Table

Sir Cumference and the First Round Table by Cindy Neuschwander is a charming reimagination of the knights of the round table.  When the troublesome Circumscribers start to threaten war on the peaceful kingdom King Arthur calls on his twelve best knights to try to find a way to prevent war.  But the rectangular table was too long, and Sir Cumference had to shout to be heard by the knights at the other end of the table.  His wife Lady Di, from the town of Ameter suggests he fix the table.  First, he tries a square but that allowed the knights at the corners to gossip during their meeting.  Then he tires try a parallelogram, but the King was forced to sit at the point which stabbed him in the belly and made him want to fight, so Sir Cumference make a triangular table, but that was too small.  He tries an Octagon but eight sides for twelve knights was did not work.  An oval is suggested next, but the oval was too small and the knights kept bumping into each other.

Finally, upon the suggestion of his son Radius, Sir Cumference makes the table a circle.  The circle table is so efficient that the King negotiates peace with the Circumscribers and he dubs his twelve best knights the Knights of the Round table.  The King also names the distance across the table diameter, after Lady Di, the measurement from the center of the circle to its edge the radius, after Sir Cumference’s son,  and the outside edge of the circle the circumference after the valiant Knight.

The beautiful full color illustrations by Wayne Geehan are sure to draw even the pickiest of readers in.  Perfect for children ages six to nine Sir Cumference and the first Round Table is educational and combines math and reading in fun ways.