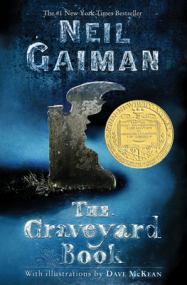 The man Jack sets out to kill the whole family, especially the baby, barely a toddler, but the child wanders away in the night, ending up in the nearby graveyard. Mistress Owens and her husband, ghosts, both of them, dead 250 years now, discover the newly orphaned boy and they become his adoptive parents. Named Nobody Owens, or Bod for short, the boy is given the Freedom of the Graveyard, and taught by his mysterious guardian, Silas, who isn't dead, but doesn't seem to be quite alive, either. Silas is able to travel between the living world and the graveyard, and brings Bod the food and supplies a growing child needs. In the graveyard, the boy learns important lessons about Fading, Sliding, and Dreamwalking, and encounters shadowy murky characters like the tattooed Indigo Man, the Sleer, and a trio of raggedy ghouls. As Silas says, "It will take a graveyard" to raise this child and keep him safe from the man Jack, who will be looking to finish his job.

You'll develop quite an affection for the long-dead inhabitants of this atmospheric English graveyard who look after Bod. Gaiman, beloved by readers for his macabre fiction book Coraline, wondered what it would be like to write a book like Rudyard Kipling's The Jungle Book, but set in a graveyard. His audio CD recording of the book is well worth hearing, as this is a Newbery Medal winner kids will want to listen to more than once, though certainly never at bedtime. I found it vexing that the book ended with still-unexplained details about Jack and Silas and Bod, but it appears that Gaiman is planning a sequel, so that's a relief.

Steer readers who like being scared silly to another fiendishly horrifying series, Joseph Delaney's The Last Apprentice, starting with Book One: The Revenge of the Witch.