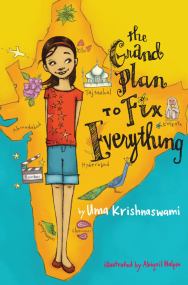 Eleven-year-old Dini adores Bollywood movies, those entertaining Hindi musicals set in India and filled with grand production numbers, adventure, and romance.  But as summer vacation begins, Dini’s life is upended when she learns that instead of the two weeks of Bollywood dance camp with her best friend Maddie that she has been looking forward to, she and her parents are heading out across the ocean for a two-year stint in Swampangiri, a small town in India.

Dini is understandably sad, shocked, and surprised, but she’s a trooper, and, appreciating how important this opportunity is for her medical-researcher mother, works hard to stay upbeat as she adjusts to her new situation. Fortunately, despite being far from Mumbai where the Bollywood films are made, Swampangiri turns out to be a place of charm, filled with beauty, delightful people, animals, and tasty treats. It also turns out to have a mystery involving the disappearance of Dini’s favorite Bollywood star, Dolly Singh.

This mystery is tantalizingly developed via multiple viewpoints and forms including letters, texts, emails, and fan magazine items. While Dini’s story stays front and center, others are threaded in, say that of a young postal worker who decides to deliver a letter himself far off his usual route and that of an increasingly-worried studio executive.  Of course, just like a Bollywood film, this story ends happily and joyously.

Young readers are bound to enjoy this upbeat and entertaining tale, identifying with Dini as she meets new friends, gets to know her new town, and solves a mystery as well.  Along the way, they will get a taste of life in one small part of India, complete with monkeys, movie lore, and some absolutely scrumptious-sounding curry pastries.