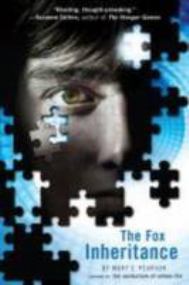 A devastating car accident left three teens at the brink of death; one, the daughter of a biomedical pioneer named Matthew Fox, was saved; the other two languished for 260 years before technology caught up with their medical injuries.

All that time, Locke and Kara, were not actually lying in hospital beds – only their brains were preserved, uploaded to little black boxes, awaiting a time when scientists could replicate their bodies using DNA harvested from nail clippings and stray hairs. When that day arrived Locke and Kara’s disembodied minds were restored in new, look-alike physiques. Actually better than new, according to their “savior,” the creepy Dr. Gatsbro: “Every ounce of them is better and smarter and stronger because it is all bioengineered,” he assures a visitor.

But Locke, who narrates, is full of questions. Why have he and Kara been recreated? Do they really qualify as human? And what happened to Jenna? How could she have just let their minds languish on a shelf for two-plus centuries while she went on living?

Gatsbro isn’t answering questions like those. He keeps the two on a short leash, never allowing them off the manicured grounds, and rarely mentioning ways in which the world beyond his gates has changed over the past centuries: Civil war has divided the United States, Mars has been colonized, the service economy is staffed by robots.

It’s Kara who figures out that she and Locke are some sort of deluxe floor models for Gatsbro’s life-extending technology, and it’s Kara who engineers their breakout. But where will they go? Everyone they knew and loved is long dead. Everyone except Jenna, that is. With the help of the most endearing robot ever to drive a limousine, they set out to find her.

The Fox Inheritance is a sequel which can be enjoyed without having read the first book. But reading The Adoration of Jenna Fox first will ground readers in the surreal and philosophically challenging terrain on which Pearson is working. Both books are well-written, fast-paced reads that will spark discussion about medical ethics, the nature of human life, and about our responsibilities to one another and to society at large.