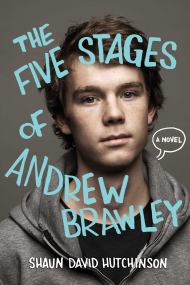 The Five Stages of Andrew Brawley

In this contemporary YA novel, a teen boy struggles with survivor’s guilt as he mourns the death of his family. After surviving the car crash that killed his parents and little sister, Andrew Brawley escapes into the depths of the hospital that pronounced his relatives dead. He sleeps in an abandoned hospital room no one has been to in ages, and keeps a low profile to blend in. He works his way into an off-the-books job at the cafeteria and he befriends some of the nurses to make all of the time he spends in the hospital less suspicious. But Death walks the halls of this hospital, and Andrew worries she will find him soon. He was supposed to die the same day his family did, and if Death catches him, it’s all over.

Days in the hospital are boring, but Andrew keeps himself entertained. He borrows iPods from the doctors and nurses’ lockers, and has become best friends with Trevor and Lexi, two teenage cancer patients. When he needs someone to talk to, he visits Grandma Brawley, an old woman in a coma who conveniently has the same last name as him. Andrew also loves to draw and maintains an ongoing comic that follows a made up super hero dealing with the death of his own loved ones.

One day, Andrew is startled by screams. Screams of pain so loud and horrid that he can’t rest until he finds out what has happened. He learns that they come from a boy named Rusty, a victim of a lurid hate crime brought upon him for being gay. A group of homophobic bullies poured gasoline over his body, and lit him aflame. Andrew is heartbroken for Rusty, not just because he’s gay himself, but also because he cannot comprehend how any human could be evil enough to do this. While Rusty is sleeping, Andrew promises to do everything he can to keep Death away from Rusty, even if he compromises his own secrets in the process.

THE FIVE STAGES OF ANDREW BRAWLEY is a gift of a novel. The characters feel real and will all make you feel so many emotions. The questions it poses about life and death are incredibly profound. Death is personified as a real human being, a hospital social worker, and it is never confirmed if she really is Death or if it is a fantasy Andrew has conjured in his head. This element of magical realism is common in Shaun David Hutchinson’s books and always heightens the power of the stories. Finally, the book is filled with Andrew’s comic book illustrations adding another fun and compelling element to an already outstanding story. This is one of those rare books that will make you laugh, cry, and punch the wall all at the same time. If you want a book that will make you emotional and also make you think, don’t miss THE FIVE STAGES OF ANDREW BRAWLEY.