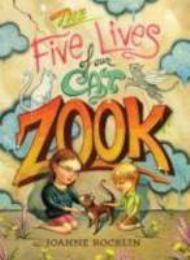 Oona has a gift for telling whoppers, but her story about Zook is as real as they come and illustrates that it is possible to endure loss and still feel hope and love.

Oona has a world of worry on her mind. The family cat, Zook (short for Zucchini) is in an animal hospital, and Oona wants to break him out, sure he will only get better at home. She’s also trying to distract little brother Fred from his concerns about Zook. Last, it is imperative that she get her mom to stop dating Dylan the Villain, a neighbor Oona suspects of abusing Zook before her family adopted him.

First things first: Oona must take care of Fred. She makes sure he eats, teaches him to read (which requires her making rebuses), and reassures him with stories about Zook’s former five lives as proof of his resiliency. It is partly through these stories that readers learn about the family’s recent loss and transition. Oona displays her storyteller’s knack for descriptive language not only in the tales, or whoppers, she spins, but also in her narration throughout the book. Effusive, sensitive Oona begins to confront her own issues. She simply can’t lose Zook because he was the one who comforted her dad, dying of cancer, in his final moments. To her intense discomfort she also has to admit that Zook wasn’t really a stray when she found him years ago. And it’s possible that Dylan was not responsible for hurting Zook . . .

The revelations are perfectly paced and heartbreaking. Oona is a believably imperfect, complex character. She carries the weight of some big secrets, says mean things to Dylan and regrets them, but is always well-intentioned. Oona adjusts her thinking and, displaying heroic self-sacrifice, she decides to find Zook’s original owner. This leads her to Phin, old and in a home now. Oona confesses and, in an uplifting moment, wise, philosophical Phin becomes absolver and granter of peace and strength. For the first time in a long time, Oona feels lighter, and the future looks brighter. Readers come away changed by their experience with Oona and Zook.