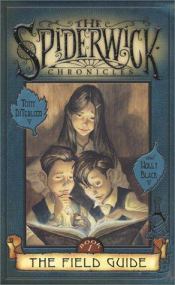 In the first book of the Spiderwick Chronicles, nine-year-old Jared, his twin, Simon, and their thirteen-year-old sister, Mallory, move with their mother to Great-aunt Lucinda's broken down Victorian mansion. Ever since their dad left, everything has gone wrong for Jared, and he has been getting in lots of trouble at school for acting out. Simon doesn't mind that Mom has uprooted them to the creepy old house, though truth be told, Aunt Lucy does seem to be a tad loony. Their older sister, Mallory, reports to her brothers that she overheard Mom on the phone saying that Aunt Lucy thinks little men bring her food every day.

Jared hears strange noises inside the walls. Squirrels, he figures. The three try to track down the noises that first night, which is when Simon finds the dumbwaiter, set into the kitchen wall. Jared climbs in, and Mallory pulls on the rope. At the top, Jared climbs out, into a secret library, lit by moonlight, with a huge dusty desk in the center of the small room. It's all very mysterious and spooky. He sees an old piece of paper with a strange little poem on it, lying on the dusty old desk, and then he hears a rustling noise behind him. When he turns to look, he sees words scrawled in the dust on the desk-words that weren't there a minute ago: "Click, clack, watch your back." Now he's really scared. "Something was here, in the room, and it could write!" Lucky for Jared, he finds a book that may help explain everything: Arthur Spiderwick's Field Guide to the Fantastical World Around You.

Get ready to meet up with mischievous and malicious boggarts, brownies, faeries, and goblins. This crackerjack little five-book series that has the same kind of feel as Lemony Snicket's A Series of Unfortunate Events, though it's easier to read. Each volume is petite and enticingly old-fashioned looking in format, with ragged edges, covers that look like embossed leather, and satisfying pen and inks by Tony DiTerlizzi, who won a Caldecott Honor for his deliciously eerie Gothic black and white illustrations in his picture book of the classic poem, The Spider and the Fly by Mary Howitt. Readers will zip through each book, and then continue with The Nixie's Song, first of the three-part "Beyond the Spiderwick Chronicles," which introduce Nick Vargas and his new stepsister, Laurie. And then, of course, there's The Spiderwick Chronicles movie, available on DVD, and the website, www.spiderwickchronicles.com.