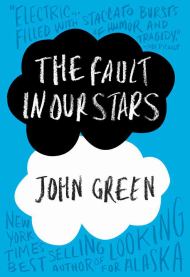 The Fault in Our Stars

It’s not hard to wrench emotion out of a story featuring two teens battling cancer; it’s much harder to produce a novel on such a heavy topic that manages to be as funny as it is heartbreaking.

Hazel Lancaster dropped out of school at 13 to concentrate on getting well. Now 16, she’s survived a diagnosis of stage IV thyroid cancer, but with collateral damage: her lungs don’t work well. She’s also depressed, and practically as reclusive as Peter Van Houten, the author of her favorite book, a novel about a teen dying of cancer which ends, infuriatingly, mid-sentence.

To please her parents (and as Hazel says, “There is only one thing in this world shittier than biting it from cancer when you’re sixteen and that’s having a kid who bites it from cancer”), she reluctantly agrees to attend a weekly support group with other teen cancer patients. It is there she meets Augustus Waters, a former basketball player who’s lost a leg to cancer. Their connection is instantaneous; both banter with razor-sharp wit as if it’s second nature. It will tell you most of what you need to know about these two that on their first “date” – he invites her to his house to watch a Natalie Portman movie because he thinks Hazel resembles her – they agree to read each other’s favorite novels before meeting again. Nerds do not get more adorable than this.

While readers will root for a romance to blossom, hanging over this relationship is the Sword of Diagnosis. An experimental medication has bought Hazel a few years, but she is terminal. She agonizes between wanting to experience real romantic love and fear that she’ll be just another grenade that explodes on Gus when – not if – she dies. She’s ridiculously considerate, but that is who she is.

Gus is more willing to take risks. His greatest fear is not of death but that his life won’t amount to anything. But he’s also ridiculously considerate, using his own “Genie Foundation” wish to take Hazel to Amsterdam to meet Van Houten and find out why he ended his novel without any real resolution.

There is no happy ending and though thousands of tears are likely to be shed over the fate of these young lovers, Green skillfully uses their lives to ask the biggest questions there are – Why me? Why now? Why risk love? What does being alive mean?

Hazel and Gus will live for a long, long time – in the memories of the readers who come to know them.