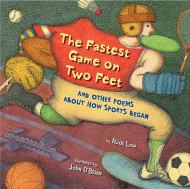 The Fastest Game on Two Feet

Poet Alice Low has always loved sports and writing poetry, so it's only natural that she should have written a collection of twenty winning poems explaining how each of 19 sports came to be. An introductory paragraph before each poem lays out factual information, but the poems themselves are full of the who/what/when/where/whys of sports. Starting with the sports that originated with early humans and ancient civilizations, there's running, skiing, swimming, doing gymnastics, and bowling. A narrative poem about soccer reveals an odd fact: it evolved in England from an eleventh century game called "kicking the Dane's head," which involved the use of an actual skull. Then there's lacrosse, played in Canada by Algonquin Indians and other tribes; golf, describing the first lady golfer as Mary, Queen of Scots; and a poem about Sonja Henie, Dutch figure skating great from the 1920s. The final poem, a ditty about the twentieth century sport invented by college students-Frisbee-can even be sung, to the tune of "Sing a Song of Sixpence:

Sing a song of Frisbie,

A pie plate in the sky.

When the pie was eaten,

One hurled the plate away?

Another caught it, wasn't that

A super game to play?

Full-page ink and watercolor illustrations teem with activity and humor. Each of these poems will make your athletes want to go outside and play, which is a fine idea in and of itself. At the back of the book is an Author's Note with further information and anecdotes (like the fact that Abner Doubleday did not have anything to do with the invention of baseball). The final page contains a time line of interesting sports facts, starting in 5200 BCE with the nine stone pins found in the tomb of an Egyptian child.