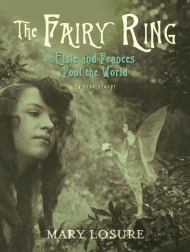 How long could you keep a secret? Sixty years?

This is a true story about a nine-year-old girl named Frances Griffiths who saw fairies - tiny men, dressed all in green - by the waterfall behind her house in England. Impossible, you say? That’s just what her parents said. But Frances’s fifteen-year-old cousin Elsie Wright wanted to prove Frances’s story. She painted paper fairies and photographed them. Then she took photos showing the girls interacting with the dainty winged creatures in the valley behind Elsie’s house. In the days when photography was an infant technology and long before there was Photoshop, Elsie produced some very convincing photographs.

The girls never meant to fool the world, but soon Elsie’s photographs fell into the hands of Sir Arthur Conan Doyle, creator of the world’s most famous detective, Sherlock Holmes. Sir Arthur, like Frances, believed in fairies, and in 1920 he published the photographs in the widely- read Strand magazine and wrote that he believed they were conclusive proof of the existence of fairies. After experts declared the pictures genuine and Doyle’s article appeared, events soon spiraled out of control and led to a myth that lasted more than 60 years

Mary Losure presents the enthralling true story of this hoax in a fanciful, detailed narrative chronicling how the situation escalated and, as time went on, how more people became personally and financially invested, making it impossible for the girls to come clean. Losure reserves judgment on the perpetrators as well as their credulous public.

The book includes reproductions of the fairy photos, allowing readers to see exactly what people at the time saw, along with previously unpublished drawings and images from the family’s archives. This remarkable true story offers a fascinating examination of human nature, revealing our perpetual fascination with the supernatural and showing how even intelligent, prominent people like Sir Arthur Conan Doyle can harbor a strong desire to believe in the unseen and let themselves be fooled. Losure brings vividly to life one of greatest hoaxes of all time, one that rivals P.T. Barnum’s feejee mermaid and Orson Welles’s War of the Worlds Halloween broadcast.