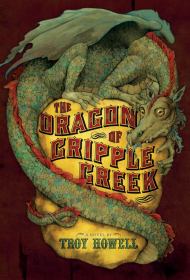 Katlin Graham, better known as Kat, loves gold. So much so that she named her childhood pony Goldie. So much so that when she was four and broke a front tooth she insisted on having it capped in gold. So much so that when she sees an ad on the interstate for tours of the Mollie Kathleen Gold Mine she won’t rest until she goes. For Kat, her older brother Dillon, and her father are heading west for a new life, their old one of wealth and comfort having ended when a freak accident put her mother in a coma and caused her father to lose everything.

Once in the mine Kat get lost, has a nasty fall, finds and pockets a substantial gold nugget, and stumbles across a dragon. A real live dragon named Ye. The last one in the world. Kate has an immediate and profound connection with Ye further deepened when he explains to her the origin of gold. Later, back on the surface, after inadvertently setting off a twenty-first century gold rush, the horrified and guilt-ridden Kat decides she must return the gold nugget to Ye. And so the tale takes off.

And I do mean takes off. There are all sorts of people after Kat from those who want to know where she got the nugget (there has to be more where it came from) to media types and more. Filled with playful language, quirky characters and one wild situation after another, this is a delightfully unusual story. And very American to boot - while Ye is a creature of the imagination, the Mollie Kathleen Gold Mine exists in Colorado.

At moments silly and at others tender and supremely moving this highly original tale will engage all sorts of readers.