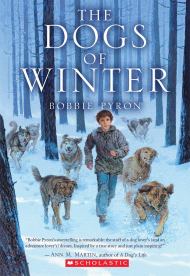 The Dogs of Winter

Readers will be riveted by five-year-old Ivan’s tragic transformation from Mishka, his mother’s little bear, into Malchik, dog boy, a member of a pack of feral dogs trying to survive on the streets of St. Petersburg. Although a stark lesson in human-failing, this story, based on an actual event, is unexpectedly uplifting.

As the book opens, Mishka’s Babushka, with whom he and his mother have been living, dies. His mother cannot cope, begins drinking, and introduces an abusive boyfriend into the home. In a terrible, largely off-stage scene, this man kills Mishka’s mother, then drags Mishka to the city to deposit him in an orphanage. When Mishka runs, his life as one of millions of street urchins in Russia begins. Cold, chaotic St. Petersburg confuses Mishka, so he is at first grateful when a tribe of children adopts him. When they want him to steal, though, something his mother has forbidden, his dilemma is painfully real: Must he, in order to live? Mishka’s hunger, not only physical but emotional, is raw. In apt comparison to his situation, Mishka often thinks of a fairytale he used to read with his mother, The Little Match Girl.

When Mishka can no longer bear the cruelty of the street gangs and the police, Lucky, a large stray dog, finds him. How Mishka makes Lucky’s pack his new family is poignantly developed, as are young Mishka’s frailties, for he feels the weight of their needs and sometimes lashes out in frustration. As they struggle to survive, the loyalty between boy and dogs feels strangely heroic. The sharp contrast between so-called “civilized” beings with the dog pack’s social system will not be lost on youngsters. The author is careful to avoid magical-realism or fantasy. The dogs’ behavior is always real, and it is up to readers to decide whether Mishka’s (now known as Malchik) interpretations of the dogs’ actions are accurate. What is sure is that children will be as heartbroken as Mishka is when he is finally noticed by authorities and torn from the family that offered him safety and companionship. The story ends with Mishka in a children’s home struggling to regain his identity as Ivan.

Bleak, haunting, fascinating, readers are sure to dream of dogs, just as Ivan does, long after the tale is done.

Morpurgo, Michael. An Elephant in the Garden. Feiwel & Friends, 2011.