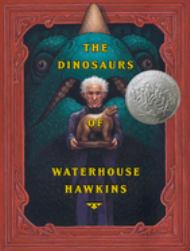 The Dinosaurs of Waterhouse Hawkins

While the cover looks like a large picture book fantasy story about dinosaurs, you'll quickly realize that this is the astonishing true account of Benjamin Waterhouse Hawkins, who in 1853 put together the first ever life-sized cement-cast models of dinosaurs, including an iguanadon and a forty-foot long megalosaurus. Until Hawkins began sculpting his models of dinosaurs and other extinct creatures in England, most people had no idea what a dinosaur looked like. This grand and flamboyant Caldecott Honor book is summarized on the title page: "A true dinosaur story in three ages: From a childhood love of art, to the monumental dinosaur sculptures at the Crystal Palace in England, to the thwarted work in New York's Central Park . . . It's all here!" To gain the approval of England’s leading scientists, Hawkins invited 21 of them for a New Year's Eve dinner party —inside the sculpted body of the iguanodon! He then exhibited his masterpieces at the grand opening of the Crystal Palace in England where even Queen Victoria attended. In 1868, Hawkins was invited to build American dinosaur sculptures in New York’s Central Park for a new Paleozoic Museum. Then disaster struck. "Boss" Tweed, the corrupt politician who controlled New York City, said the museum was a waste of money.

Vandals broke into the workshop, smashed all the dinosaurs, and buried them in Central Park, exact location unknown. Broken in spirit, Hawkins nevertheless gamely continued on to Princeton, NJ, where he created a series of paintings showing the development of life on Earth, including the dinosaurs.

Extensive, fascinating author and illustrator notes at the back of the book clarify additional details. Readers examining Selznick's impressive Caldecott Honor-winning paintings, modeled after original sketches made by Hawkins and on the dinosaur models themselves, will be quick to point out the inaccuracies in Hawkins’s dinosaurs. You can use this as an example of how information changes rapidly with each new scientific discovery. Dinosaur expert, Peter Larson, and Kristin Donnan put together a remarkable color photo-illustrated handbook, Bones Rock!, for all serious dinosaur-obsessed kids. Also share one of the picture book biographies of Mary Anning, who in 1811, at the age of twelve, dug up the first fossil of an ichthyosaur ever found from the cliffs of her seaside town of Lyme Regis, England.