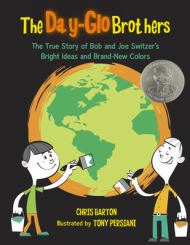 Just when you think you’ve read about every possible subject, someone comes up with a biography about someone you never heard of who did something groundbreaking. Think Wilson “Willie” Bentley (who was the first person to photograph snowflakes, as described in Snowflake Bentley by Jacqueline Briggs Martin, which won a Caldecott Medal for illustrator Mary Azarian). Then there’s Benjamin Waterhouse Hawkins (who was the first person to build life-sized models of dinosaurs, as described in The Dinosaurs of Waterhouse Hawkins by Barbara Kerley, which won a Caldecott Medal for illustrator Brian Selznick). Now meet the brothers, Bob and Joe Switzer, who wanted to be a doctor and a magician, respectively, but ended up inventing Day-Glo paint. And it all came about because of an accident.

In Berkeley, California in 1933, 19-year-old Bob Switzer, working at a pickle and ketchup factory for a summer job, fell and hit his head. It affected his memory, so there went his plans for medical school. He had to stay home for months in the darkened basement. Joe, 15 months younger, was trying to jazz up his magic act with ultraviolet light that would make things glow in the dark. The two began to experiment with paints, secretly mixing them in their mother’s new kitchen mixer. “The results? Splattering, gooey, glowing paints. And once, when Mrs. Switzer surprised them before they could clean all the paint out of the mixer, a peculiar-looking angel food cake.” Kids will laugh at the picture of the boys’ mom, proudly holding a peculiarly pink confection (though the text doesn’t mention if anyone actually ate it). In 1935, they hit upon a formulation that didn’t need black lights to glow brightly. “By accident Joe and Bob had invented a totally new color.” They called it Fire Orange, the first of several colors they created.

This jaunty picture book bio provides an overview of their lives, discoveries, and ways Day-Glo colors helped the U.S. and its allies during World War II. The book, winner of a prestigious Sibert Honor for distinguished informational books for children, is itself illustrated in gorgeously gaudy Day-Glo colors and cheerful cartoon-style illustrations. In the back matter, you’ll find an explanation of how both regular and daylight fluorescence work, and an Author’s Note on how the author researched his two subjects. Readers will want to check out Popular Science, Joe Switzer’s favorite magazine, now online at www.popsci.com.