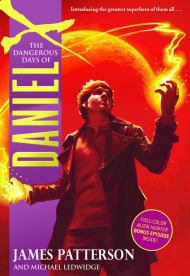 The Dangerous Days of Daniel X

“I wish that I didn't sometimes, but I remember everything about that cursed, unspeakably unhappy night twelve years ago, when I was just three years old and both my parents were murdered.” That's just the start of Daniel's extraordinary narrative that grabs you by the scruff of the neck and never stops shaking. That night, The Prayer, Earth's most notorious alien, in the guise of a man-sized praying mantis, invaded Daniel's house, in wrathful pursuit of The List of Alien Outlaws on Terra Firma, which Daniel's father, the Alien Hunter, had hidden. The vengeful creature would have murdered Daniel, too, if he could have found him. The quick-thinking little boy transformed himself into a dog tick, crawled atop The Prayer's greasy head, and escaped unharmed.

Now Daniel is 15, and he's sure not your run-of-the-mill teenager. Physically transforming himself and his surroundings using his mind is just one of Daniel's life-saving talents. He has assumed his father's job, working his way down The List, confronting and eliminating Earth's enemies, from faceless metallic humanoids to shape-shifting protoplasm, and preparing himself to take on Alien #1, The Prayer. Daniel's Level 3 physical strength comes in handy in battling low-level aliens, but gunning for the big prey will require more cerebral and creative problem-solving skills. His most astonishing ability is to create real flesh-and-blood people with his mind-including his own parents, a younger sister named Pork Chop, and a quartet of best friends. When he needs extra brawn, brainpower, comfort, or just a little company, he can mentally project them into actual existence with his memory.

And there's one other important detail about Daniel X. He, himself, is an alien, but a good one. Now Daniel is in L.A. hunting, and being hunted by, his most powerful and lethal opponent yet: Ergent Seth, a suave and ruthless mogul, believed to be in the film industry, #6 on the List, and reported to have Level 6 strength. This creep has ultimate plans to depopulate Earth and colonize it with his own species, but first, he's gunning for Daniel. To blend in with the community, Daniel enrolls himself at Glendale High School, an all-new experience for him, where he falls for Sarah Wilson, a girl who likes him back and needs his help.

Readers will demand more books about the wise-cracking, elephant-loving, hard-fighting, danger-luring gourmand Daniel as he dispatches the depraved aliens on the List. The graphic novel, Daniel X: Alien Hunter, where he takes on #7, will be out in December, 2008, and another novel soon after. Your kids will be on guard for aliens with every grownup they meet.OTHER BOOKS IN THIS SERIES:Daniel X: Watch the Skies. Patterson, James. Little, Brown, 2009. (251 pages; AGES 10 AND UP) ISBN-13: 978-0-316-03618-4
On a summer Saturday in the little town of Holliswood, something sinister is happening. A group of motor oil-guzzling aliens has been videotaping footage for an intergalactic reality show production. They’re forcing humans to sing and dance to old disco songs, and then vaporizing them. Who is the leader of these murderous henchbeasts? He’s Number 5 on Daniel X’s List of Alien Outlaws on Terra Firma, and an up-and-coming producer and mogul in the alien world. He’s got the body of a thousand-pound sumo wrestler and the head of a catfish. Number 5 calls his new concept of alien programming endertainment, which he then syndicates to networks across the cosmos. His latest talent search has brought him to Holliswood, from which he plans to branch out until he’s enslaved and overrun the entire planet Earth. Top on the list of talents he seeks is Daniel X, and he’s looking forward to toying with the young alien hunter before he kills him.

Sixteen-year-old Daniel and his four best friends—who, if you remember from the first book in the series, are created out of thin air from Daniel’s imagination when he needs company or help—are riding down the highway on their super souped-up motorcycles when they stop at a diner. Daniel has discerned the stench of Number 5 inside and prepares for battle. Unfortunately, the baddies have just cleared out, leaving behind a trashed restaurant and an unconscious young waitress, whom Daniel revives. Her nametag reads Judy Blue Eyes, and Daniel takes quite a shine to her. He puts himself on superspeed and has the place cleaned up in seconds. Next thing he knows, he’s telling her all about himself and his mission as an Alien Hunter. He’s getting quite a crush on her. You can’t blame him from getting distracted, but in the meantime, he has aliens to confront.

All over Holliswood, things are weird. Daniel looks on, mystified, as one pregnant woman at the local S-Mart fills her minivan with cases of motor oil and fish food. Other pregnant women converge on the store, desperate for more of those two odd items. Inside, broadcasting from a video screen, is the scowling fish head of Number 5 himself. Hearing a commotion coming from aisle five, Daniel rushes over to find a makeshift film set staffed with 10 henchbeasts who start to melt terrorized shoppers with their weapons. There’s something just as fishy going on in town, with women receiving strange cans of caviar in the mail in a diabolical plan to make them incubate the alien fish spawn within. The whole town seems to have been cut off from the rest of the world and its residents brainwashed.

As an alien himself, Daniel has quite a list of talents and super powers. He has seven senses; can pop a wheelie on the front tire of his motorcycle; can listen, inside his head, to any song he’s ever heard; can jump 30 feet in the air; can conjure up his parents and little sister whenever he needs some family time; and is a master of self defense arts. Still, Number 5 seems to be far more powerful than Daniel. Number 5 has hacked into all the electronic devices in town and is able to track and watch Daniel right through his TV screen and laptop. Ridding the planet of Number 5 and his pals will be Daniel’s biggest challenge yet.

There’s an extensive and interactive website with blogs for all of James Patterson’s books and characters at www.max-dan-wiz.com. If it’s Daniel you want, go to: www.max-dan-wiz.com/page/watch-the-skies for excerpts, a blog, a book trailer, and even a free download to hear the first half of the book read aloud.