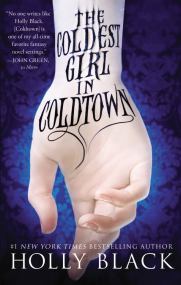 The Coldest Girl in Coldtown

If you’re looking for a young adult vampire novel that isn’t cliché, you absolutely have to read Holly Black’s THE COLDEST GIRL IN COLDTOWN. The story has interesting characters, a one-of-a-kind plot, in-depth world building, and an incredible setting unlike any you’ve read before. It also has a well-developed system and explanation for vampirism that is unique to this world.

In this story, humans have discovered vampires and have exiled them to coldtowns—closed-off cities meant to hold vampires. The government scours the world for vampires not yet trapped in coldtowns, and there are cash prizes awarded to hunters who successfully turn in captured vampires. However, there are also humans who voluntarily enter coldtowns hoping to be turned into vampires themselves. But humans in coldtowns are used as vampire food, and vampires are very choosey about who they let transform. Humans who enter coldtowns are a special kind of crazy because once someone enters a coldtown, vampire or human, they can never leave.

The book opens with seventeen-year-old Tana waking up in a cold bathtub the day after a wild high school party. She leaves the bathroom and discovers the bloody corpses of all the party-goers sprawled out in the house’s living room and kitchen. Upon closer examination, she sees the bite marks and realizes there was a vampire massacre that she somehow survived. Her instinct is to get away as fast as she can, but she soon finds Aidan, her ex-boyfriend, still alive and chained to a bed by his wrists and ankles. Next to him is a pale, black-hared boy with red eyes. This is the closest Tana has ever been to a real vampire.

Aidan has been turned, meaning he was bitten by a vampire, but not killed. He will develop an animal-like craving for human blood and once he drinks it, he will transform into a full vampire. He can avoid being turned into a vampire if he doesn’t drink blood for 88 days, but with the primal cravings he’s feeling, that will be nearly impossible.

Tana sees that the vampire boy next to Aidan is also chained up, and there are other vampires chasing them. These vampires are hiding close by, and will attack Tana, Aidan, and the vampire boy as soon as the sun goes down. Tana frees Aidan and the vampire boy and begins a long, thrilling, and exciting adventure that, for better or worse, will leave her trapped in a coldtown.

This is a magical story filled with thrills, plot twists, and romance. The coldtown is also one of the most beautifully written and unique settings in any fantasy YA book. Readers who enjoy rich settings, mythical creatures, and well-written, fast-paced stories will love Holly Black’s THE COLDEST GIRL IN COLDTOWN and should make it the very next book they read!

“We’ve all read a million YA vampire stories at this point, but no one writes like Holly Black: Her worlds are funny and eerily vivid, and Coldtown-a rollicking and decadent ghetto-is one of my all-time favorite fantasy novel settings.”―Author of The Fault in Our Stars John Green, Metro New York

* “You may be ready to put a stake in vampire lit, but read this first: It’s dark and dangerous, bloody and brilliant.”―Kirkus (starred review)

* “Teens with a yen for dark, futuristic novels, and maybe even a few Anne Rice readers, will find this a refreshing take on vampire lit. As always, Black’s writing is quick paced and thought-provoking. A must-have for any teen collection.”―School Library Journal (starred review)