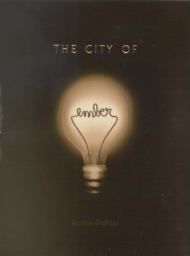 The City of Ember

In the City of Ember in year 241, the sky is always dark. There is no moon, or even sun in Ember. The electric lights come on every morning at six, and go out every night at nine. The city is old, and everything, including the power lines, needs repair. Whenever the lights go out, the city is plunged into terrifying darkness. When this year's two dozen twelve-year-old graduating classmates are assigned their lifetime jobs, two of them, Lina Mayfleet and Doon Harrow, secretly switch their assignments. Lina becomes a messenger, delivering spoken messages for people in the city. Doon becomes a pipeworks laborer working in the tunnels that contain Ember's water and sewer pipes, down by the underground river. It's a frightening and dangerous job, but Doon, looking for the chance to do something to help his city, wants to learn all about the generator that powers everything. Ember is running out of all the supplies that has kept it running for 241 years, with only darkness beyond it in the Unknown Regions. Disaster is right around the corner. Can two mere children figure out how to save Ember before the lights fail for good?

Ask your children to contemplate what it would be like to live in a place where such things as cars, computers, air conditioning, oceans, trees, and the sun were unknown. Readers will want to follow Lina and Doon in the sequels, The People of Sparksand The Diamond of Darkhold, and read the prequel, The Prophet of Yonwood.

And viewers, take note: the movie version, City of Ember, starring Tim Robbins and Bill Murray, is due out in October, 2008. For a sneak peek, view the trailer at: www.randomhouse.com/teens/booksofember/home.html