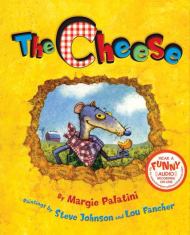 "What a waste of a chunk of cheddar," the rat grumbles, gazing at the huge wedge of cheese down in the dell. It looks so yellow, so mellow, and so tasty. Defying the posted rules and regulations, which state, "The cheese stands alone," the rat grabs a napkin and heads down to the meadow for a nosh. On the way, and one-by-one, he is joined by the cat, the dog, the farmer's child, the farmer's wife, and finally the Farmer in the Dell, himself, who declares, "Nope. Can't eat the cheese. CHEESE STANDS ALONE. Everyone knows that." Is this rule meant to be broken? For maximum effect, stop before turning to the last page and ask your listeners what they think the rat, now standing alone with the cheddar, is going to do. Should he eat that cheese? Why or why not? Once again, parody master Palatini makes hay with her sprightly reworking of a classic nursery rhyme. The illustrations are so comic and expressive, they'll make you want to break out some cheese and crackers for an impromptu party.