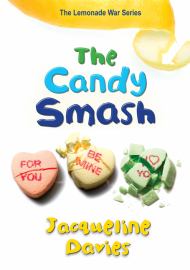 What’s fourth grade all about?  Friendships, secrets, classroom drama, and the start of figuring out who you are.  And, when it’s close to Valentine’s Day, fourth grade is about first romance. On top of that, Mrs. Overton, Jessie and Evan Treski’s teacher, has chosen this time of year for her poetry unit, and the kids are all reading and writing poems about love.  Oh – one more thing – candy hearts with personal messages – are showing up on the kids’ desks. Most of the messages are simple appreciations of classmates’ strengths: Ryan’s heart says “slam duck;” Tessa has a “nice smile;” and Nina is a “spelling champ.”  But Evan’s message is different.  His hearts say “be mine.”  Who is sending the hearts?

Jessie decides to get to the bottom of this. Her strategy is to use the class newspaper and do some serious investigative reporting.  Once she starts digging, she makes discoveries, and she prints them, not thinking about the consequences.  Her brother Evan convinces her not to distribute the issue with the big reveal, but somehow one copy gets into somebody’s hands. As a result, Megan, Jessie’s friend, is embarrassed when she is named the source of the candy-hearts.

Chapters alternate between Jessie’s new dedication to journalism and Evan’s discovery of his own passion for poetry. Jacqueline Davies takes full advantage of both, giving readers lots to learn and think about in both fields – from the difference between investigating and snooping to  poetry techniques from metaphors to hyperbole. All the while the classroom drama unfolds, the clues add up, and the relationships of the kids in Mrs. Overton’s class change and grow making Candy Smash a satisfying read on several levels.