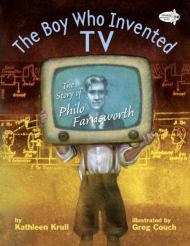 The Boy Who Invented TV

First, before you dig in to this handsome picture book biography about inventor, Philo (pronounced Phil-o) Farnsworth, the author includes a one-page essay about life on a farm in the American West in 1906, where Philo was born in a log cabin in Utah. Back then, there were no refrigerators, cars, movies, radio, and no TV. Children who have grown up tied to their electronic devices will find that hard to fathom. Philo, a boy who loved to take apart things to see how they worked, considered inventors like Edison and Bell his heroes. He learned to play the violin, fended off bullies at school, and read voraciously his beloved popular-science magazines. Putting theory into practice, he attached a motor to the family's hand-cranked washing machine, and won a magazine contest for his invention of an ignition lock that would make the new Model T Ford hard to steal. At age 14, plowing the potato fields on his family's farm, he looked at the furrows and saw in them a way to transmit parallel lines of light as electrons, which he called "capturing light in a bottle." This is how he conceived of his idea for television, leading, in 1928, at age 22, to his greatest invention. In the No-Good-Deed-Goes-Unpunished Department, an Author's Note explains how he had to fight RCA for the patent, and got little recognition for his invention during his lifetime, though he received 150 more patents for his other inventions, and died in 1971 at age 64, all but forgotten. Full-page light-infused acrylic and mixed-media illustrations capture the intensity and drive of a young man whose contribution changed the world.

Here's a sentence for readers to think about and maybe try before retiring: "Philo hit upon a way to work twenty-four hours a day: he set himself problems to solve while sleeping." Philo hoped television would help families and communities share stories, become less ignorant of each other, and even lead to world peace. Find photos and other information about him at www.philotfarnsworth.com.