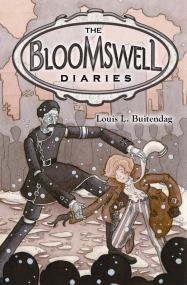 The Bloomswell Diaries is a steampunk adventure story, centered on eight-year-old Benjamin Bloomswell. (If you’re unfamiliar with the term, steampunk is a new science fiction genre. Think Jules Verne, steam-powered machines, airships, and Victorian aspects.)  While Benjamin is no hero, the events that occur in the novel would test any child’s character, and readers watch as Benjamin rises to the occasion.

A surprise visit to Uncle Lucas in America takes Benjamin from his safe London home when his famous mother and father are called away on unexpected business.  There Benjamin reads in a newspaper that his parents have been declared dead.  Confused and scared, Benjamin asks his uncle, who does not confirm his parent’s death, but rather reveals that there is more to the Bloomswell family than young Benjamin knows.  The family has enemies who want to steal their fortune.

That very evening, kidnappers break into Uncle Lucas’s home.  Benjamin is captured and taken to a gloomy, foreboding orphanage.  It is there Benjamin learns the true nature of the plot against his family, and realizes he is the only one who can save them.

A brave escape leads Benjamin to a shipyard, where he gains passage to England.  The voyage brings new challenges, each of which Benjamin overcomes with courage and perseverance.  Adversity and danger take a back seat to Benjamin’s newfound bravery.  Little did Benjamin know, but he was a hero all along.

The world of The Bloomswell Diaries is one where thieves dwell in shadows, mechanized Tinmen run on clockwork, and nobody is to be fully trusted.  The book’s texture is distinctly turn-of-the-century, yet imbued with a fantastic steampunk flavor.  The combination heightens the adventure, which is nonstop - every turn of the page brings new conflicts, difficult obstacles, and challenging characters that Benjamin must defeat in order to rescue his family.  While the action is daring and exciting, it is without unnecessary violence to make it inappropriate for younger readers.