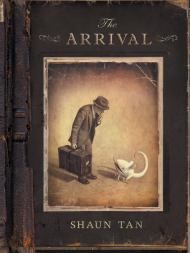 When you first pick up this very brown and battered-looking wordless picture book graphic novel with the sepia-toned photograph on the cover, of a man in a suit and 1950s-style fedora, carrying an old suitcase, it looks like an old photo album you found up in your grandparents' attic. Then you look closer. What is that creature the man is contemplating? It's the size of a small white dog, but the head is part of the egg-shaped body, and there are no real feet—each of its four legs comes to a point, and it has a big upswept pointy tail and a huge opening for a mouth. It looks sort of like a benign walking fish. Open the book and leaf through the stained pages, some filled with little rows of sepia snapshots, and others with sweeping double-page landscapes. The uncaptioned pages follow the bittersweet journey of a poor man who leaves his wife and daughter behind to travel by train and then by ship to a marvelous new land. His old country seems to be infested with threatening, spiky-tailed serpents, but this wondrous new city is filled with imponderable wonders, including that small white creature which becomes the man's faithful pet. As an immigrant, he finds everything bewildering and unfamiliar: the transport by suspended telephone booth-sized boxes, the food, the architecture, and the language. Soon he meets and is befriended by other immigrants who tell him about the fear, war, and violence that sent them fleeing to this good new place. The man ultimately finds work, and in a hopeful ending, is reunited with his family.

This saga of one immigrant man trying to work out all the rules, customs, and differences of his new home is a stunning achievement, told entirely through pictures that look familiar and fantastical at the same time, just as this country must've looked to your ancestors when they got here. There's more to pore over and puzzle out in the meticulous illustrations than you may have the concentration to do, but your children, who are probably far more visually literate than you are, will figure out lots of it. Have them put into words a description of the new land, describing the architecture, housing, food, pets, animals, work, money, alphabet, customs, music, transportation, and recreation. Since the illustrations are all in shades of brown, perhaps they can draw a picture of what the city looks like in color. Tell your kids true stories of how your family members came to America and what they did when they got there.