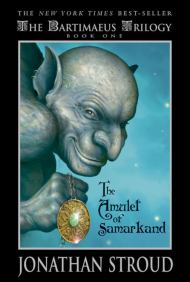 The Amulet of Samarkand

Harry Potter fans, rejoice. Here's the first of The Bartimaeus Trilogy, a crackling and original English fantasy that takes place in an alternate London. The viewpoint alternates between the overblown, self-possessed, wisecracking and sometimes put-upon narrative of a 5,000-year-old djinni, Bartimaeus, and an omniscient narrator who follows Nathaniel, a twelve-year-old boy-magician-in-training. In the very first chapter, Bartimaeus is less than pleased to be summoned into the middle of a pentacle by a scrawny kid, shaking like a leaf, who pipes, "By the constraints of the circle, the points on the pentacle, and the chain of runes, I am your master! You will obey my will!" Nathaniel commands him to bring back the Amulet of Samarkand, an ancient artifact now reposing in the house of Simon Lovelace, a powerful and vengeful magician politician, and the djinni has no choice but to bow to the boy's foolish command.

Nathaniel, who was sold by his parents to the government when he was five, has been apprenticed since then to Mr. Underwood, a peevish and unpleasant low-level bureaucrat of a magician who works for the Ministry of Internal Affairs. The only bright spot in his life is Mrs. Underwood, a motherly woman who is his sole source of tenderness or kindness. When Nathaniel is embarrassed in front of other magicians by Simon Lovelace, the boy sets to work, secretly studying his master's magic texts and planning his comeuppance. Once Bartimaeus succeeds in stealing the magical amulet for Nathaniel, the whole of London is drawn into a political intrigue of power-hungry magicians, corruption, and even murder that could topple the entire magician-run government. This is a hefty but fast-paced, thrilling, and often very funny novel that will keep readers up at night, and lead them to the other books in the trilogy: The Golem's Eye and Ptolemy's Gate. Also check out The Ring of Solomon, published after the trilogy, which recounts one of Bartimaeus's previous adventures, the time he was forced to work in the court of the Biblical King Solomon.