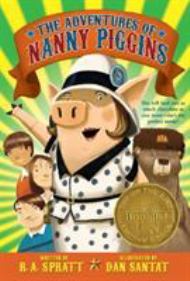 The Adventures of Nanny Piggins

Desperate to find a nanny for his three children—eleven-year-old Derrick, nine-year-old Samantha, and seven-year-old Michael—Mr. Green, a parsimonious and dreadfully boring lawyer, pounds a sign for a nanny on his front lawn. After three weeks with no response, he is only too willing to hire the four-foot pig in a blue dress who knocks on the door, especially when she tells him her fee is a whole ten cents an hour. In a Mary Poppins story run amok, Nanny Piggins, whose only previous job experience is as a flying pig at the circus, supposes her new job can’t be any harder than being blasted out of a cannon.

The children immediately fall in love with their new nanny who lets them eat chocolate before, after, and instead of breakfast, encourages them to read trashy literature at the dining table, and spends the $500 Mr. Green gives her to buy school uniforms on a joyous day of terrifying rides at the amusement park. Each hilarious chapter is a self-contained, chocolate-smeared adventure, a feast of the absurd, just crying to be read aloud. Who wouldn’t want a nanny like Nanny Piggins?

You will want to be sure to look over the Disclaimer from the author at the front of the book that includes this warning: “Unless you are a pig do not copy Nanny Piggins’s diet IN ANY WAY. . . . There is no doubt that chocolate cake, cookies, tarts . . . and chocolate chip pancakes are all delicious, but that does not mean you should eat them seven or eight times a day. Also, you really must eat vegetables, no matter what Nanny Piggins might say to the contrary, or you will get sick.” Drat.