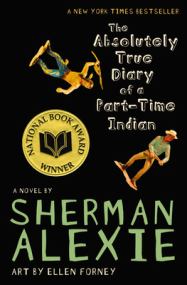 The Absolutely True Diary of a Part-Time Indian

“I was born with water on the brain.” So begins the digressive and loquacious narrative and cartoon drawings of 14-year-old Arnold Spirit, better known as Junior. He lays out his limitations straight off: too much cerebral spinal fluid at birth has left him nearsighted in one eye and farsighted in the other; he has huge hands and feet, and a skull so enormous, kids call him Orbit and Globe. Weekly seizures, a stutter, and a lisp endear him to no one. He calls himself “just a poor-ass reservation kid living with his poor-ass family on the poor-ass Spokane Indian Reservation.” How does Junior cope with his life? He draws cartoons of everyone he knows, thinking this might be his ticket to becoming rich and famous someday and escaping the rez. In the meantime, when his dog, Oscar, gets sick and his family has no money for a vet, there’s nothing Junior can do to save him. Junior says, bitterly, “It sucks to be poor, and it sucks to feel that you somehow deserve to be poor.” Finding his mother’s name in his geometry book and realizing the tattered book is at least thirty years older than he is infuriates Junior, and leads to his decision to transfer to Reardan, an all-white high school 22 miles from the reservation, where the other kids laugh at his name. Worse still, Junior’s best friend Rowdy, the toughest kid on the rez, who has always protected him from getting beat up, is furious at him for leaving and becomes his enemy, giving him a black eye. “What was I doing at Reardan, whose mascot was an Indian, thereby making me the only other Indian in town?” Junior ponders. At his new school, he punches Roger the Giant in the nose for making the most racist joke he’s ever heard, falls in love with Penelope the Beautiful, becomes friends with Gordy the Genius White Boy, and tries to redeem himself at school and on the rez through basketball.

Winner of the 2007 National Book Award for Young People’s Literature and the 2008 Boston Globe-Horn Book Award for fiction, adult author Sherman Alexie’s first YA book, loosely autobiographical, is hard-hitting, heart-breaking, wildly funny, sometimes raunchy and profane, and unforgettable. Grown-ups will want to read this one, too, and probably more than once.

Characters in Mr. Alexie’s work are not the usual kind of Indians…They are not tragic victims or noble savages…they listen to Jimi Hendrix and Hank Williams; they dream of being basketball stars…And unlike most Indians in fiction, they are sometimes funny.
The New York Times

His talent is immense and genuine…Sherman Alexie is one of the best writers we have.
The Nation

Hilarious but poignant…dead-on accurate with regard to modern Indian life.
Publishers Weekly

.Sonnenblick, Jordan. Zen And The Art Of Faking It. Scholastic, 2007.