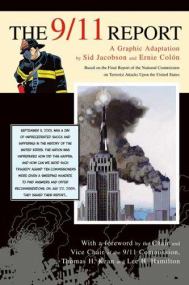 A graphic novel adaptation of the 9/11 Commission's 800-page The 9/11 Report: The National Commission on Terrorist Attacks upon the United States? You saw it here first! This amazing comic book actuallybreaks down the events of and events leading up to the unforgettable attacks of September 11th in comic book form, making the information much more accessible to everyone.

With a dedication to all those who lost their lives to the attack, the graphic novel veterans Sid Jacobson and Ernie Colón hope the book can help the rest of us understand that day and the years leading up to it. The foreword is written by chairs of the 9/11 Commission, Thomas Kean and Lee Hamilton, giving their blessing and hoping the edition will energize and engage its readers.

The graphic novel begins with a minute-by-minute account of the hijackers boarding their four American planes. Three of the men had actually set off alarms, and were directed towards a second metal detector. They quickly passed inspection, though, and a bubble informs the reader that the screener never resolved what set off the alarm.

What follows is a hugely informative, yet simple, timeline of the flights over the next hour, showing the incidents that were happening between the four flights. Flight 11 loses communication and quickly crashes into the North Tower of the World Trade Center, killing all the civilians on board and the 2,973 people in the building. Flight 175 strikes the South Tower soon after, killing a still untold number. Cell phone bubbles are drawn around the picture of the plane, reading "It's getting bad, Dad… a stewardess was stabbed… they seem to have knives and mace. I think we're going down… My God, my God…" Flight 77 hits a side of the Pentagon, killing officials inside and the civilians on board. The panels of the events of Flight 93 depict a bloodier match, as the people inside the aircraft are informed about the other attacks via cell phones and, though unarmed, defend themselves. One panel shows the hijacker pilot rolling the plane back and forth and in circles, trying to knock its occupants down, before bringing the plane down in a field in Pennsylvania.

The rest of The 9/11 Report is more involved in the miscommunication among American officials that morning, the complicated history of the rise of al Qaeda and Osama bin Laden, the threats the American government received years earlier, the bombings and threats the world received, all leading up to the cataclysmic event in the fall of 2001. The book ends with a new recommended global strategy to promote peace, and the Commission's recommendations for the nation; the outlined strategies and policies makes sense of the famous report card the Commission issued the President and Congress. "While terrorists have been learning and adapting, we have been moving at a bureaucratic crawl," the report card reprimands.

Be warned; the panels hide nothing in some of the more horrifying scenes of what took place. Scowling men wield knives over crying stewardesses' heads, and the Soviets' and al Qaeda's arms race is drawn in rich detail. The book is a must for those older readers, eager to learn about September 11th without being bogged down in jargon. High schoolers and adults alike will refer to this graphic novel for years to come.

Satrapi, Marjane. Persepolis: The Story of a Childhood. Pantheon, 2003.

Spiegelman, Art. In the Shadow of No Towers. Pantheon, 2004.