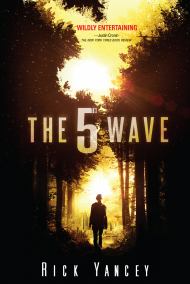 Depending on how attached you are to your smart phone/tablet/computer, the “first wave” of attack by malevolent aliens intent on wiping out the human race in Yancey’s gripping thriller will either make you chuckle, or send a chill down your spine. The aliens opening move is to disable all our electronics.

This, of course, does more than prevent kids from texting each other. Planes, whose navigational systems now depend on computers, fall out of the sky. Cars halt. School is cancelled, businesses shut. This blackout is permanent. It’s a savvy move by the author because the reader is immediately asked to consider: Whoa, could this really happen?

It gets worse, though. Whoever it is who’s out to get us – we’ll have to wait until at least book two in this planned trilogy to find out – has clearly thought things through. Wave No. 2 targets our oceans, setting off tsunamis that flood the coastal cities, where most of the world’s population lives. As humans move inland, the third wave takes out most of the survivors by spreading a virus that goes, well, completely viral.

Now you’re up to speed. The story starts during the fourth wave, in which snipers are picking off the scant remaining few. Readers find out what’s already gone on from Cassie Sullivan, 16, who along with her little brother, Sam, and her father, have so far dodged annihilation. “We were like the Japanese who survived the initial blast of the Hiroshima bomb,” Cassie tells us in a wise-beyond-her-years voice. “We didn’t understand why we were still here, and we weren’t completely sure we wanted to be.”

Cassie’s narration pauses to allow readers to see another side of the apocalypse from the point of view of her (unrequited) high school crush, a handsome football player named Ben Parish, who is being trained as a soldier in the same encampment where Sam has been taken, against his – and Cassie’s – will. As the story seesaws between what’s happening with Cassie and what’s happing with Ben, readers are kept off balance, sometime knowing more about what’s really going on than the characters themselves do.

To round out this novel,  there’s  romance, too --  a love triangle and one more character worth mentioning here: Evan Walker, who rescues Cassie but whose story doesn’t quite add up. The only member of his family left alive, he’s a crack shot, but something tells Cassie she can’t trust him, even though he’s been nothing but kind to her. The problem is the survivors like Cassie know there is a “fifth wave” coming, but they don’t know what it is. Nor do they know what the enemy looks like either. What if “it” looks like us?

Plenty of “aftermath” stories have tried to capitalize on the phenomenal success of The Hunger Games, but Rick Yancey has managed to create something that steps out of the huge shadow cast by that series, and the blockbuster movie it spawned. The Fifth Wave is definitely dark, but it’s exciting and thought-provoking. It’s a must-read this summer for the culturally literate teen.