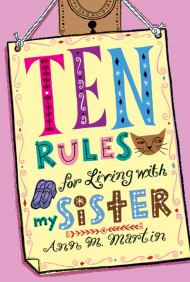 Being Lexie’s younger sister isn’t easy.  Pearl keeps a chart about just how unfair it is:

There’s more: Lexie wears a bra and lipstick, has a boyfriend, her own cell phone and her own key to the apartment.  Pearl doesn’t, and she’s jealous.  She takes that out by playing pranks on her sister: When Lexie’s had enough (which is often!), she bans Pearl from her room and gives her the silent treatment.  Readers won’t blame Lexie, but at the same time, they’ll be completely sympathetic with Pearl.

After all, Pearl is having a tough time.  She has no friends at school – because of Three Bad Things that happened in second grade – embarrassing things that everyone remembers.  At home, she can’t figure out her place.

Everything changes when Daddy Bo, their grandfather, falls and has to move in with the family.  Pearl and Lexie have to share a room. Pearl no longer feels so alone – now she’s got her grandfather to talk to, and he thinks whatever she does is wonderful.  He calls Pearl a gem.  (She doesn’t get the pun, but she likes it anyway.).  As the months pass, it’s becomes clear that Daddy Bo’s forgetfulness and his sometimes strange behavior are part of something much larger. Petty problems take a back seat, and Pearl steps up.

Ann M. Martin gives us the real deal in this easy-to-read, eventful novel.  No magic fairies making things work out, but real-world solutions, believable changes, recognizable and complicated feelings.  In Pearl she creates a multi-faceted character, who like the rest of us, is a mix of good and bad, who struggles to make the pieces fit, and who sometimes succeeds.