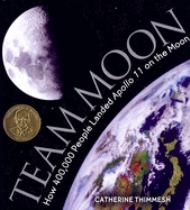 When reading nonfiction, it's grand to discover something new. Tell me something I don't know! Or tell me something I do know, but present it in such a way as to make it feel brand new. In 2009, we celebrated the fortieth anniversary of a most memorable summer. Here on Earth, the New York Thruway had its worst traffic jam ever when half a million music-lovers headed to Woodstock for the rock concert of the century on August 15. That was small potatoes compared to what half a billion people saw on their (probably black and white) television screens on July 20, 1969. They watched in fascination and awe as Neil Armstrong stepped onto the surface of the moon. People used to say, when talking about something that they considered impossible, "That'll happen when a man walks on the moon." And now, here it was, actually happening. There were two men walking on the moon.

There may have been three men on Apollo 11 that day, but according to Thimmesh's splendid piece of original research on what happened behind the scenes, it took 400,000 people to get them there-including 17,000 at the Kennedy Space Center, 7,500 workers at Grumman who constructed the lunar module, flight directors, engineers, electricians, designers and seamstresses who made the space suits, doctors, and navigators. In a large-format scrapbook of dramatic black and white and color photographs and white text set against a glossy black background, we read the gripping story firsthand from the (mostly) men who reveal the many challenges and problems they faced getting ready for the flight and in the mission itself.

For instance, did you know that Armstrong and Aldrin came within 60 seconds of aborting the landing because, less than 500 feet from the moon's surface, they were almost out of fuel. What if the Apollo 11 mission had ended in disaster? President Richard Nixon was prepared to say this to the world: "Fate has ordained that the men who went to the moon to explore in peace will stay on the moon to rest in peace. These brave men, Neil Armstrong, and [Buzz] Aldrin, know that there is no hope for their recovery. But they also know there is hope for mankind in their sacrifice." Lucky for us all, the mission was successful and Nixon never needed to give that speech.

Thimmesh's elegant text states, "And now, at this defining moment, the world had come together-like nothing ever before-not only to wish the astronauts Godspeed, but to bear personal witness to this incredible event. On that day people gathered: in homes and schools and businesses; in restaurants and shops; and on sidewalks and on streets and in parks. They were eager to be a part, however small, of something so out-of-this-world big." The accompanying full-page black and white photograph shows a large crowd of young people, applauding and cheering, with looks of jubilation and wonder on every face.

Lists of sources and websites to explore, an index, and a glossary round out this distinguished volume, which, not surprisingly, won the 2007 Sibert Medal for informational children's books. To find out what happened to Michael Collins, the third guy on the mission, who orbited the moon while Neil Armstrong and Buzz Aldrin were stepping out, read The Man Who Went to the Far Side of the Moon: The Story of Apollo 11 Astronaut, Michael Collins by Bea Uusma Schyffert. Aldrin wrote a wonderful picture book autobiography for children, Buzz Aldrin: Reaching for the Moon. For a resplendent you-are-there description, pull in the nonfiction picture book If You Decide to Go to the Moon by Faith McNulty, with sensational paintings by the great Steven Kellogg. And finally, go space traveling to the moon and beyond in Philip Reeve's sci-fi fantasy adventure novel, Larklight.

Burleigh, Robert. Earth from Above for Young Readers. Abrams, 2002.

Schyffert, Bea Uusma. The Man Who Went to the Far Side of the Moon: The Story of Apollo 11 Astronaut, Michael Collins. Chronicle, 2003.