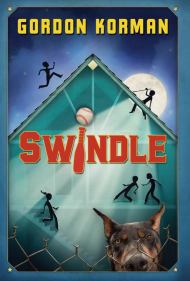 Sixth grader Griffin Bing is known as the Man with the Plan. But out of the 29 kids he invited to his secret sleepover at the old Rockford house the night before it is to be torn down, only Griffin and his best friend Ben Slovak show up. Just because it's dusty and dark and supposedly haunted is no reason for the two boys to back down and leave. Indeed, when Griffin finds the old Babe Ruth baseball card stuck in the rolltop desk left behind in one of the mansion's rooms, he feels vindicated. What if it's worth real money? Maybe his parents would stop arguing about moving to a more affordable neighborhood. In the morning, after a hair-raising escape from the wrecking ball, Griffin and Ben head over to Palomino's Emporium of Collectibles and Memorabilia, where the owner gives him 120 bucks for the card, claiming it is a knockoff made in 1967. What a liar! Griffin soon sees the dealer being interviewed on TV, showing the selfsame 1920 baseball card, worth a cool million, which he plans to auction off. When Griffin confronts Palomino, the man sics Luthor, his Doberman, on him. What can a mere kid do? Griffin assembles a heist team—Ben, computer genius Melissa, dog-lover Savannah, acting nut Logan, rock-climber Pitch, and even his arch nemesis and tough kid Darren—and together they plan to steal back that card.

Kids will love reading this fast-paced, sassy caper about self-sufficient kids who refuse to let a bad guy get away with it. Go to www.scholastic.com, type Swindle in the search bar, and you'll find, on its home page, a link to a terrific booktalk by the author, Gordon Korman. For background on the Sultan of Swat, read Robert Burleigh's poetic Home Run: The Story of Babe Ruth, part poem, part tribute, and part biography, is illustrated with photo-realistic paintings that take you right onto the field with the Babe. Dan Gutman’s Babe and Me: A Baseball Card Adventure is a time travel adventure novel that will also satisfy Babe Ruth fans.