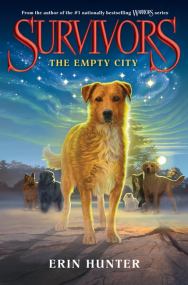 In SURVIVORS, Erin Hunter, creator of the popular WARRIORS series, introduces us to a world of dogs rather than cats.  Readers will find it as compelling, eye-opening and exciting as its feline counterpart.

Lucky, a sheltie-retriever mix, wakes from a dream of his mother telling him the story of one of the battles from The Storm of Dogs.  Suddenly, The Big Growl comes, and with the help of Sweet, Lucky is freed from his cage in the Trap House.  The other dogs aren’t so fortunate, and they die.  Lucky has always prided himself on being a Lone Dog, someone who has always been able to survive on his own, so he sets off independently, determined to survive in this city with no humans, known as longpaws.   The Big Growl has destroyed the city, leaving many dangers and little food or water.  Lucky runs into an old friend in a shopping mall and saves his life.  As a repayment, he gets a bit of food that he desperately needs.

While at the mall, Lucky meets his litter sister Bella, who has joined a group of Leashed Dogs, dogs who used to belong to the longpaws.  Bella asks Lucky to join them, but he yearns to be on his own, away from the pampered pets.  He’s torn between his desire to help his sister and his desire to rely on his instincts and be independent.  This sets up the tension of the story:  should Lucky stay or should he go?

The Leashed Dogs are a funny lot.  From Martha, a gentle Newfoundland, to Sunshine, a Maltese who struggles to adjust to life without the longpaws, the dogs are true to the characteristics of their breeds and make wonderful characters.  Throughout the story, they learn to rely on their instincts to survive, but continue to hope for the longpaws’ return.  The story moves quickly, with plenty of challenges.  The Leashed Dogs have much to learn about survival and they struggle to learn the ways of the wild when they have so many memories of being cared for.

Animal-lover Gillian Philips joins the Erin Hunter team as the author of the SURVIVOR series.  She has created identifiable characters and provided plenty of adventure in this first book of the new series. Kids will want to check out http://survivors.warriorcats.com/survivors/.  The website has background information about many of the characters as well as games and an interview with Gillian.

This companion to the WARRIORS series certainly stands on its own, with appeal to both boys and girls looking for a great adventure.   Fans of the WARRIORS will enjoy a look at another species and will be glad to see that the dog mythology is as complete as the cat mythology.  All readers will be eager for the sequel, A HIDDEN ENEMY, scheduled to be released in spring 2013.