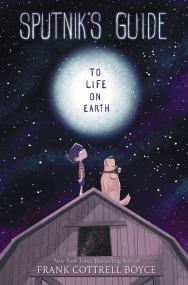 Sputnik's Guide to Life on Earth

Prez Mellows is already a bit traumatized when he’s sent to live with a foster family on a farm near Scotland’s border with England. When the doorbell rings during his first dinner with the very talkative, incredibly loud, Blythe family, Prez goes to answer it even though the recent trauma he’s suffered has rendered him mute.

It turns out to be a fateful decision. At the door is Sputnik Mellows. Because they share a last name, Prez first assumes that Sputnik is a long-lost relative, come to take him out of foster care for at least as long as it takes his grandfather to be “sorted out” wherever it is police have taken him.

Alas, there’s a complication. Though the creature at the door is oddly dressed – Prez describes him as a “wee alien in a kilt and goggles” – he appears to the Blythes and everybody else as an adorable, exceedingly clever, dog. Only Prez can communicate with Sputnik (who reads Prez’s mind) and from him he learns that Sputnik is on a mission to save Earth from “Planetary Clearance” by updating a guidebook, originally written by Laika, the Russian space dog. They need to find ten things on Earth worth seeing by the end of the summer or it’s curtains for the planet.

Boyce is British, and not as well known in the U.S. as he should be. In the UK, he was chosen by Sir Ian Fleming’s heirs to write sequels to Fleming’s only children’s novel: Chitty Chitty Bang Bang. Boyce wrote a follow-up that outshined the original. He has written half a dozen original middle grade novels, including Millions, Framed, and Cosmic, each of which blend humor and heart in equal parts for poignant stories that brim with appealing characters and lots of hilarious hijinks. Sputnik’s Guide shares the winning formula of Boyce’s previous books.

Sputnik’s mission combines his highly advanced knowledge of scientific principles and a penchant for mischief to produce an avalanche of kooky mayhem. He and Prez cause a lot of pandemonium as they search for worthwhile things to see on Earth. In the end, the most important thing Prez finds is not a tourist attraction or a fascinating historical site, but a new definition for the meaning of home.