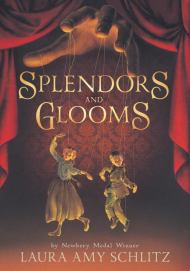 Justice, redemption and salvation all come into play in this gripping mix of gothic horror and historical fantasy.

In a Dickensian London made eerie by evil and magic, two orphans, Lizzie Rose and Parsefall, live with the puppeteer Grisini. Their lives are grim enough when they make a sinister discovery: their master has cast a spell on Clara, a wealthy girl, turning her into a puppet in a kidnapping scheme. The orphans are determined to save Clara but worry they cannot protect themselves from a similar fate. With trepidation, they confront Grisini in a horrific yet comic scene and are astonished when he subsequently disappears. Their relief is temporary. Survival without Grisini is almost impossible despite the “generosity” of their drunk, eccentric landlady, and they are no closer to releasing Clara. So when Lizzie finds a letter from a mysterious woman called Madama promising riches if the children visit her in Italy, they fall for the ploy and carry Clara with them.

Once there, they learn that Grisini’s story -- and now theirs -- is intertwined with Madama’s. Madama is a bitter old witch who is being burned alive by a jewel that grants her supernatural powers. In the past, Grisini tried to steal the jewel from Madama and failed. Now she commands him to try again, this time using the children to perpetrate the theft.

Readers will be held spellbound by suspense, wondering whether or not the children will uncover the nefarious plot before caving to a temptation that may well mean eternal damnation. At different points, they will live and breathe in the skin of each of the characters including Clara, whose perspective as a puppet is disturbingly narrow and claustrophobic. With its well-described settings and palpable fear, the story tears towards its surprising conclusion, as readers learn much about human nature at its worst and best.