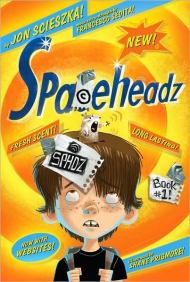 It's Michael K.'s first day in a new school, P.S. 868, in a new city, Brooklyn, New York, and though he's only been there for twenty minutes, it's already seriously weird. His new teacher, Mrs. Halley, has put him in the slow group with two strange new kids. How strange? The new girl just ate half of her pencil, and the new boy has just told him that they are Spaceheadz from another planet. They talk in TV jingles like "JUST DO IT" and "I'M LOVING IT!" and try to recruit him to Mission SPHDZ. Aliens don't invade fifth grade classrooms in Brooklyn, New York and expect you to help them save the world, do they?

Meanwhile, in a noisy, tiny, one-room apartment overlooking the Brooklyn-Queens Expressway, Agent Umber receives an urgent call on his AAA Picklephone® from his Chief at the Anti Alien Agency, informing him they are on Alert Level Red. What are the coordinates of the dangerous alien activity? Look on Umber's computer screen and there it is: P.S. 858.

Graphically, the layout is a standout, interspersing all-black pages with white print, with regular text pages. The print tends to veer at odd angles and there are loads of comical black and white illustrations and pages of far-out facts. Over-the-top slapstick humor seals the deal-kids will love the look of this and wait impatiently for the next installment. Fortunately, the mission-to recruit 3.14 million earthlings to be Spaceheadz so the Earth will not be turned off-continues in Spaceheadz, Book #2!. For the interactive component, kids can become SPHDZ at www.sphdz.com, check out the AAA at antialienagency.com, and visit Mrs. Halley's class website at mrshalleyscomets.com.