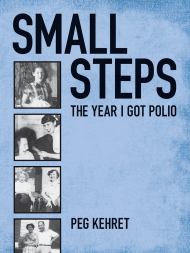 "Polio is a highly contagious disease. In 1949, there were 42,033 cases reported in the United States. One of those was a twelve-year-old girl in Austin, Minnesota: Peg Schulze. Me."

Chapter 1 of children's book author Peg Kehret's astute memoir is titled "The Diagnosis." It started on a Friday in early September. Peg was looking forward to being in the Homecoming parade that afternoon. During seventh grade chorus, a muscle in her left thigh began to twitch uncontrollably. When Peg tried to stand, her legs buckled and she fell to the floor. Still, she walked the 12 blocks home for lunch. Assuming she had the flu, her parents sent for the doctor and she was taken to the hospital for a spinal tap that confirmed she had polio. Transferred to the Sheltering Arms Hospital in Minneapolis, a special hospital for polio patients, by the next morning, she was paralyzed. Kehret's spunky personality and great sense of humor helped her cope as she struggled through physical therapy, listened to "The Lone Ranger" on the radio with her young roommate, Tommy, who was in an iron lung; flirted with her young doctor, Dr. Bevis; and spent several months in a room with three other polio girls. For seven months she withstood her rehabilitation, finally returning to school and normal life again.

Now, years later, she suffers from post-polio syndrome, like so many polio sufferers. In this tenth anniversary edition of the book, Kehret includes an updated epilogue about her life in the past decade, including coping with the death of her husband. Also included in this edition are twelve new pages of photographs, and information about polio. This brave and terrifying autobiography will draw kids, who love all the gory details. They'll examine the snapshots of Peg, her family, and her hospital friends. They'll be thankful, in this age of AIDS and bird flu and swine flu, that polio is no longer a threat to children. And they'll consider their own lives and wonder how they would have handled a diagnosis and a tough recovery like Peg's.