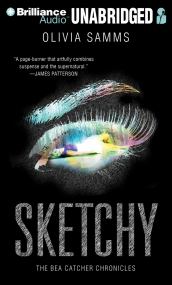 Bea is fresh out of rehab, fending off her former drug dealer and struggling to stay straight. Her parents don’t trust her. Their vigilance, suspicions and over-protectiveness are unnerving. She’s been kicked out of her fancy day school, and is unenthusiastically starting over at the huge public high school where the popular kids whisper behind her back about her druggie past.

Only two positive things alleviate the crushing pressure. One is Chris -- a gay guy who shares Bea’s interest in art and becomes her close friend. Second is her gift and passion for art. Between art and sharing art with Chris, life for both of these “misfits” could move on with relative ease.

If only there hadn’t been two horrendous assaults on young women. If only one of the young women hadn’t been a cheerleader at Bea’s new school. If only Bea hadn’t made a profoundly weird and unsettling discovery.

Willa, the cheer leader, claims to have no memory of the attack or the attacker, but Bea knows Willa is lying. When Bea looks at Willa, she sees and then sketches what Willa is thinking. And Willa is thinking in detail about her attacker. Bea feels compelled to take action. She revises the police sketch of Willa’s attacker to look like the man she saw in Willa’s thoughts. When Willa sees Bea’s sketch, she totally freaks out. She and her friends accuse Bea of mocking her ordeal and tampering with official police evidence. Later, Willa confronts Bea in private, demanding to know if Bea has contact with the man she drew on the poster. Bea reassures Willa and offers to help her. Willa breaks down and admits her belief that the attack was all her fault. She was high on drugs and alcohol when she accepted a ride in the stranger’s car. Again, Bea reassures her, but Willa spurns her, spreads nasty rumors about her, and gets her in trouble at school.

Bea tries sharing her information with the police. They brush off her offers to help. Bea is frantic. No one takes her seriously. She becomes even more agitated when she identifies the attacker as a teacher at the local university. She knows this dangerous man will strike again and that she is the only person who can stop him. But how?

Readers will be cheering for Bea and celebrating her quirky, sweet friendship with Chris. They’ll be booing the bad guys -- who are just about everyone else in the book. Suspense intensifies, pages flip, and the ending is totally satisfying. All that’s left for the reader to do is wait for Book Two.