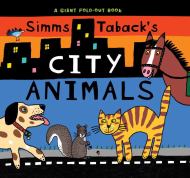 Labeled a "giant fold-out book," this appealing and colorful animal book contains a series of six riddles that even the youngest child will delight in solving again and again. On the first heavystock page is an illustration of what appears to be a large gray and white tail. Underneath, in big, black print, is the question, "Who am I?" On the facing all-black page is a clue, in big white letters: "I gather acorns." Now lift up the right-hand page and you'll see the animal's gray body and four paws. Oh, look! On the light blue flap above, there's another clue: "I have a big furry tail." The only part not visible yet is its head, but your child, nestled contentedly on your lap, will start hollering, "It's a squirrel." Really? Open up that final flap for the complete picture of a life-sized squirrel, staring balefully at you with his big brown and black eyes. In huge black letters, it states, "I'm a SQUIRREL!" The 18" by 18" illustration is a blast of colors-yellow sky, orange ground and acorns, indigo buildings in the background, and, center stage, that big gray squirrel looking like you startled him when you opened the page.