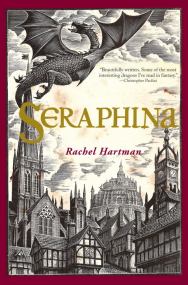 Seraphina is a first novel (by a comic book creator) and it is astonishingly good; intelligent, original, heartbreaking, and I say this even though I am not a big fan of dragon fantasies, which this is (at least in part). It must also be said, upfront, that it’s a challenging read – full of invented words, long passages about saints, philosophers, and musical instruments you have never heard of, and a subplot that takes place almost entirely in the main character’s mind. It takes a while to settle into its rhythms, but readers who stick with it will be richly rewarded with this first volume in a forthcoming trilogy.

We first meet 16-year-old Seraphina Dombegh at the funeral for a prince -- not just any royal, but the heir to the throne -- and not just any death, but a murderous beheading that the public has whipped itself into frenzied belief is the work of a rogue dragon. An assistant to the court composer, Seraphina captures widespread attention when she moves the awestruck crowd to tears with her sublime rendition of the a traditional song played to ask St. Eustace to guide a soul to heaven.

Already charged with Princess Glisselda's music lessons, her profile now rises to a new, uncomfortable, level. She is ordered to attend social functions, and gets caught up in court politics, which involve the quickly approaching celebration of the 40th anniversary of Comonot’s Treaty, the pact which established peace between dragons and humans. Prince Lucian, captain of the Queen’s Guard and Glisselda’s fiancé, recognizes immediately that Seraphina has an unusual understanding of both human and dragon nature that could help him manage ongoing unrest following the unsolved murder.

But as the anniversary ceremony approaches, Seraphina is forced to come to terms with a secret that could change everything. Her mother, who died in childbirth, was a dragon. Along with the silver scales on her arm and circling her waist, Phina has visions, which she has trained her mind to keep in a place she calls her “garden of grotesques,” of a dozen or so people or creatures whose purpose and nature she doesn’t quite grasp. She is sure if her true nature is revealed, she would find herself cast out of each world she has a foot in – human and dragon.

There’s so much subtext to Hartman’s novel. The humans steadfastly hold to an assumption that they are the superior species. The dragons, with their ability to fold into human shape, are accused more than once, of trying to “pass.” Seraphina’s divided nature is reminiscent of the mixed-race child who never feels at ease in any one category.

But this novel is definitely more than any one thing. Fans of Megan Whalen Turner’s Attolia series and Kristin Cashore series about the Gracelings will enjoy the palace intrigue and the hint of romance. Readers of Christopher Paolini’s Eragon books will find new, interesting dragon lore. But most of all, readers who like a story told with a unique voice will find Seraphina a companionable narrator and an admirably feisty heroine. Readers will root for her to find love and self-acceptance, and eagerly await the next installment in her story.