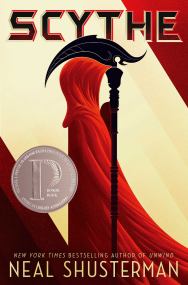 Imagine a future where dying is no longer a problem. There’s no need to worry about disease, accidents, or murder because death just isn’t possible anymore. This is the world that SCYTHE takes place in. You might be wondering about the obvious question: what about overpopulation? Well, that is why there are scythes in this fictional future. Scythes are the only individuals capable of killing, called “gleaning” in this world, and they only do it to keep the Earth’s population under control.

Teenagers Citra and Rowan are selected by one scythe to be scythe apprentices. They’ll train for a year and take a test to determine if they will be deemed a scythe. Only one will become a scythe, while the other will return to their normal life. However, Rowan and Citra don’t want to be a scythe. Who would want to bring death upon people for eternity?

They learn quickly that their disinterest in the position is valid. Not only do they have to witness peoples’ deaths, they also have to be present when people are told they are to die. They have a hard time dealing with it, but they are thankful to have each other to talk to. However, romance is not allowed between them which becomes a conflict as they spend more and more intimate moments together and continue to share their feelings.

SCYTHE is a unique blend of fantasy and sci-fi that touches on many complex themes. Each chapter in the book is preceded by scythe journal entries hinting at the rules of scythedom and the history of the world. They are a unique world-building tool that feels natural and ties into the plot because Rowan and Citra are asked to keep their own journals.

Neal Shusterman is an outstanding writer who has built an utterly stunning world in this book. The premise of SCYTHE is highly conceptual and complicated, but Shusterman manages to make everything simple while still making you ponder existential questions about death and the value of life. It also has one of the greatest endings in young adult fiction. You’ll want to pick up the sequel as soon as you finish this book.

A truly astounding, unputdownable read and a fast-paced beginning to an excellent sci-fi series. A must-have.—Tyler Hixson, School Library Journal