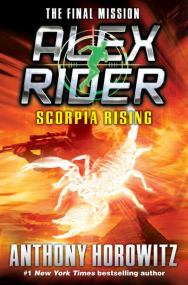 Action and adventure abound in this ninth and final installment of Anthony Horowitz’s thrilling Alex Rider series. After eight dangerous and daring missions, the teen spy has come to his last. But this mission is like no other. The danger is greater, the stakes higher, the villains deadlier, as Alex once again goes up against Scorpia, the terrorist organization that he’s fought and barely defeated twice before.

Alex Rider, fifteen-year-old British spy, thought he had left the world of espionage and MI6 (the British equivalent of the CIA) behind when he foiled Desmond McCain, yet another villain bent on world devastation. Four months have passed since he battled the madman in Africa, and in those four months, he hasn’t heard so much as a peep from MI6. He’s been able to live a normal life – waking up late for school, not cleaning his room, playing soccer with friends, and auditioning for the school play. But all that comes to a screeching halt when bullets begin flying at Alex while he’s at school one day. To make matters worse, the only people he knows to turn to for help are the last he wants to see – Alan Blunt and Mrs. Jones, the directors of MI6.

As it turns out, MI6 needs the help of the young spy. They strike a deal with Alex: They’ll enroll him in the Cairo International College of Arts and Education in Egypt so he can spy on the school’s head of security who is suspected of plotting a high-profile kidnapping, while they search for Alex’s attackers in London. It seems like a harmless enough assignment, but as his eight previous missions have proven, there’s no such thing as an “easy” mission.

Filled with thrilling action and riveting suspense from page one, this latest Alex Rider novel, like the previous books in the series, is sure to keep all readers enthralled as they race through the book to see what happens to the young spy. Try these books out on reluctant boy readers. With a protagonist they can relate to and action, adventure, and super spying, this series can’t fail to please.

The Rest of the Series: