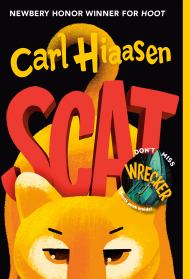 Nick's biology teacher, Mrs. Bunny Starch, nearly six feet tall, with died blonde hair, bright violet eye shadow, and polyester pantsuits, is the most feared teacher at the Truman School in Naples, Florida. Nick's friend, Marta, still has nightmares since she threw up in class and Mrs. Starch assigned her a paper listing the five major muscles used in regurgitating. Today, Mrs. Starch is waiting for someone to explain the Calvin cycle, and when no hands go up, she pounces, pointing her pencil at Duane Scrod, Jr., big, indifferent, and built like a bull. Kids keep their distance from him; loner Duane, who likes to be called Smoke, is rumored to be a pyro. For his sullen response, she assigns him a five-hundred-word essay on pimples. "Get outta my face or else you'll be sorry," he growls, and then chomps her No. 2 Ticonderoga in half, chews up the graphite and the wood, swallows it, and ambles out the door.

The following day is the class field trip to the Black Vine Swamp. Nick's hoping to sight a panther, which is unlikely since there are fewer than a hundred of the big cats left in Florida. Nick has a lot on his mind; his dad, a captain in the Army Reserve in Iraq, hasn't e-mailed home for three days. In the swamp, they hear a piercing cry, and Nick records on his video camera a large, tannish blur, running through the cypress trees. Then they smell smoke from what is probably a wildfire. Libby, a girl with asthma, has dropped her inhaler, and Mrs. Starch runs back into the swamp to find it. She does not come back out. In the middle of the night at Libby's house, her black Lab starts to bark. What do they find outside but Libby's asthma inhaler. Is Mrs. Starch still alive? There are many tantalizing and darkly comic plot threads and characters to follow in this environmental adventure, including the mysterious vigilante who is on to the Diamond Energy Corporation and the illegal oil drilling operation it is trying to set up in the swamp.

Your students will want to find out more about the elusive and dangerous Florida panther. Have them look up the Calvin cycle, too. You can get the book on CD, narrated by Ed Asner, but this is one entertaining read-aloud. Hiaasen, a writer for adults before he published the Newbery Honor winner, Hoot, specializes in ridiculing and exposing environmental corruption in Florida and its impact. There are the endangered owls in Hoot and the releasing of raw sewage into the Florida Keys in Flush, all investigated by kids who get involved.