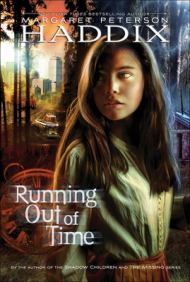 Running Out of Time

In 1840, with more of the children falling ill in their isolated little village of Clifton, Indiana, Jessie's ma takes her into the woods to look for herbs. Ma has been acting secretive and strange, but what she now tells Jessie is incomprehensible. It seems that Clifton isn't an ordinary village; it's an authentic historical preserve and tourist site, going far beyond reenactment sites like Colonial Williamsburg. None of the children in Clifton have any idea that in the larger world, the year is actually 1996, and busloads of tourists come to view daily life there via the mirrors in every house and building. With many of the children dangerously ill from diphtheria, and the owner of the site seemingly unconcerned if they should die, Ma wants Jessie to escape from the compound and find the one man she thinks can help them.

Aside from the suspense of Jessie's escape into the modern world, there are interesting ethical issues to chew on. Why does this little community exist? Is it right that outsiders should watch the villagers live their daily lives? Why might Jessie's parents and the other adults have consented to living there? Then there are the pragmatic issues: of what other inventions (cars, computers) and customs (watching American Idol on TV, trick-or-treating) would Jessie be unaware? How would you explain them to her?

Of course, in recent years, there have been numerous reality TV shows of families living in reconstructed houses or even communities, to see what it would be like to live in the past. The City of Ember by Jeanne duPrau is another riveting dystopian novel dealing with authority gone awry and children who uncover its secrets. Two good comparison novels that take place in the actual time period of the 1840s, are The Birchbark House by Louise Erdrich and Adaline Falling Star by Mary Pope Osborne.

Haddix, Margaret. Among the Hidden. Simon & Schuster, 1998. (And others in the Shadow Children series.)