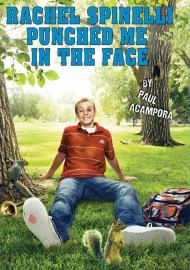 Fourteen years old may sound too young to need a fresh start, but after Zachary Beatrice’s mother abruptly decides to fulfill her lifelong dream of working on a cruise ship, Zachary and his father decide seeing mom’s hometown of Copper Lake, Colorado, in the rearview mirror would be healthy for both of them.

Luckily, there’s a job for Officer Beatrice in Falls, a small Connecticut town with an inordinate number of lovable residents: The Polish couple who run the ice cream store keep a taxidermied German Shepherd as sentinel. “Did that used to be your dog?” Zachary asks. “He still is my dog,” Mr. Koza answers. “We could not imagine the ice cream shop without him,” adds Mrs. Koza. The librarian is named Fines. Despite being “very, very pregnant,” Zachary’s music teacher stands on her desk to announce the “Mrs. Yee Award” for the top musician at Falls High. “We could try to catch her if she fell, but I don’t think that would have gone well,” Teddy says.

Which brings us to Falls’ only unlovable citizen (at least initially), Rachel Spinelli. The title suggests why. But Rachel is more than an experienced pugilist; she’s in desperate need of an anger management program. Officer Beatrice assesses people by what he adjudges their superpower to be and he thinks Rachel’s is rage, fueled by her mother’s death – giving birth to Rachel.

Indeed, mothers do not fare well in this novel. One is selfish, the other all-too-human. But absent and dead mothers are a dime a dozen in middle-grade novels. What distinguishes this story is Acampora’s light touch with a weighty subject – this is a very funny book – and how Zachary uses his mother’s defection and his careful observation of Rachel to grow into a stronger kid himself.

Over the course of the summer, Zachary figures out Rachel’s real superpower. “It wasn’t anger that made her strong. It was the way she loved her brother,” he says. “She protected Teddy ferociously. That was Rachel’s real superpower. Ferociousness.” Kids who have a sibling with a disability will recognize this quality right away.  At a very early age, Rachel figured out Teddy needed her protection more than Rachel needed mothering herself, even if it meant earning a reputation for throwing a mean punch.

By the time Zachary’s mother comes seeking forgiveness, Zachary has the backbone to confront her about the deep hurt she caused him and his dad. But he has also learned to make room in his heart for people who are less than perfect.