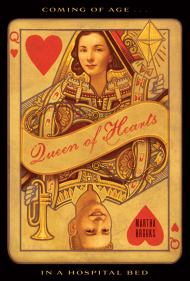 The next time your hear a teen complain about how boring their life is, here’s a possible antidote – the very moving account of a 15-year-old diagnosed with tuberculosis who must do nothing but rest for months, perhaps years, on end.

Marie-Claire Côté lives on a farm in Manitoba. World War II is raging across the Atlantic when her Oncle Gérard, who hopped a freight train out of the prairies six years earlier, reappears, looking very much worse for the wear. Nonetheless, Marie-Claire and her younger brother and sister are thrilled – Gérard is playful in all the ways their stern father is not.

But Gérard, “twenty five years old and a pile of bones,” is diagnosed with TB. In 1940s Canada, treatment began with isolation. Gérard moves into a sanatorium; visitors are strongly discouraged but the damage has been done: All three children are shortly diagnosed with TB and shipped off to the sanatorium, as well.

Marie-Claire, angry and scared, is paired with Signy, a rich girl from Winnipeg who, despite having received her own diagnosis five years earlier at age 12, is relentlessly cheery. Separated from her brother and sister, virtually ignored by her parents, Marie-Claire has trouble receiving Signy’s earnest offer of friendship. Instead she focuses on maintaining a connection with her family by writing notes to her brother, which are answered by his roommate, a young (handsome) musician named Jack Hawkings.

Martha Brooks, one of Canada’s most decorated authors of books for young adults, grew up on the grounds of a sanatorium, daughter of the medical superintendent. Though the treatments TB patients underwent decades ago sound unbelievable, she writes convincingly about them – hours spent outdoors in the cold air, disfiguring operations to purposely collapse lungs and remove ribs, constant bed rest, strictly rationed baths.

The strength of the story, however, lies in the journey Marie-Claire makes from self-pity to empathy. Marie-Claire, justifiably, feels sorry for herself – she’s imprisoned in bed when she should be out dancing. But Signy’s situation is even sadder. The moment Marie-Claire finally sees beyond her own despair to return her roommate’s goodwill is the moment you know Oncle Gérard’s final words to Marie-Claire – “So you made it, my little queen of hearts. I knew you would.” – are destined to come true.

Brooks’s premise may not instantly click with readers, but they will sympathize with the book’s prickly heroine, who feels as though “my world as a normal person has just ended.”
Publishers Weekly