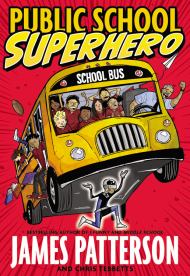 Kenny Wright lives in a bad area of Washington, D.C. His middle school, Anacostia, is a wreck. Luckily, he is being raised by his grandmother, who taught elementary school for 62 years and keeps a close eye on him.  But, poor Kenny is also confronted with a group of bullies in his school, and his close relationship with his grandmother doesn't help.

When Kenny gets detention for the first time, he is assigned the nearly impossible task of teaching one of the school’s biggest bullies, Ray-Ray, how to play chess. During their weeks of playing together, the two boys learn things about each other that lead to an unlikely friendship.
Public School Superhero is a story about bullying, but it is also a story about honesty and the meaning of friendship. The plot highlights the plight of many poor inner-city schools, but the narrative also includes hope for the future. Kenny has a comic book collection as well as a rich fantasy life wherein he is the superhero Stainlezz Steel. With his vivid imagination acting as his guide, he can outwit and conquer any problem, big or small. Public School Superhero takes us on a humorous journey through an inner-city school, where humor is the least thing you expect to find.
Readers will find a kinship with the main character, Kenny, who tries to do the right thing but sometimes ends up in the wrong places. They will probably also enjoy watching goody-two-shoes Kenny become friends with ansty, troubled, Ray-Ray.  This is one that will please book lovers and reluctant readers.