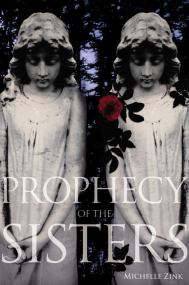 Prophecy of the Sisters

Sixteen-year-old twins Lia and Alice Milthorpe are horrorstruck to find their father dead by unknown causes in their house's Dark Room, the room in which their deceased mother used to live. But his death pales in comparison to the dark events that follow Lia the next few days: her sister becomes cold and cruel, a strange mark of a snake appears on her arm, and a mysterious book reveals a foreboding, thirty-line prophecy. It begins:

Through fire and harmony mankind endured Until the sending of the Guards Who took as wives and lovers the woman of man Engendering His wrath. Two sisters, formed in the same swaying ocean, One the Guardian, One the Gate…

As Lia finds herself and her sister more and more entwined in the ancient secrets of the prophecy, her sister grows further away from her, leaving them close to enemies. Lia believes herself to be the good twin. But as her father always warned, things are not always as they seem. Lia's prospects become bleak as she unravels the prophecy and so unravels her own fate: will she be responsible for the coming Apocalypse?

Set in late 19th-century upstate New York, Prophecy of the Sisters paints a beautiful picture of two girls on an elite estate coming to terms with their haunting new realities. Lia's love interest James brings some familiar Stephenie Meyer-esque tension to the story. Alice begs the mystery on, as Lia stumbles upon her sister's bizarre new habits, from attempting to seduce James to violently holding down the family cat. This gothic tale has readers turning its pages not only for the action of the coming battle of the fallen angels and Samael (Satan), but also for the chilling psychological curiosities between the characters. Boys and girls alike will be eager to find out the gloomy future of the twins... and the rest of the world.

Meyer, Stephenie. Twilight. Little, Brown, 2006. (And other titles in the Twilight Saga series.)