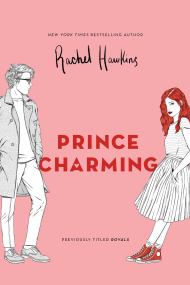 Daisy is a small town redhead from Florida whose life isn’t all that exciting. She’s not the most popular girl in her high school, and she works at the local grocery store. However, everything changes when Daisy's sister, Ellie, gets engaged to Prince Alex of Scotland. Just by association, paparazzi and fame invade Daisy’s life, and she’s not very happy about it.

The royal family's publicist invites Daisy and her parents to Scotland for the summer. There, she meets Prince Alex's little brother, Prince Sebastian, and his crew of five best friends. The six boys are well known in Scotland as “The Royal Wreckers” because of their craziness and destructiveness throughout Europe.

Prince Alex and Ellie are the ones getting married, but they are the side characters in this novel. The story centers on Daisy, her adjusting to life in royal Scotland, and her friendship and potential romantic relationships with the royal wreckers.

Daisy is an incredible narrator. She is witty, funny, and points out the backward ways of royalty any chance she gets. She calls out the royal wreckers and their families’ antics constantly, and as a result, isn’t well-liked in the high society she is forced to become a part of.

As the story goes on, Daisy develops a close friendship with Prince Sebastian. He is the leader of the royal wreckers, and is also the main reason their name holds up so well. He is only 17, but has a bit of an alcohol problem and isn’t afraid to pick fights. Daisy learns about the sensitive side under his rough exterior. She also dampens his ego which is extremely satisfying. Sebastian, however, isn’t Daisy’s love interest in this story; It is Miles—Sebastian’s best friend—who Daisy develops the romantic connection with. It is a slow-burn romance that is developed as a combination of the YA enemies-to-lovers trope and the fake dating trope. It is wonderful.

This book is really fun and you will absolutely breeze through it. Even if you aren’t normally a fan of stories about royals, the characters and the hilarity are enough for anyone to enjoy this fast-paced read. The romance, the class dynamics, and the strong feminist characters make this a must-read for all YA fans.