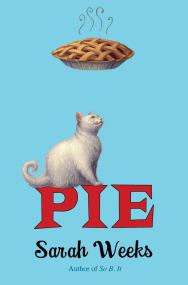 Children are sure to eat-up Pie, a light mystery with a heavy dollop of familial love.

When Alice’s Aunt Polly, the pie queen, dies, little Alice is sure no one misses her as much as she does. Except maybe Aunt Polly’s ornery cat Lardo whom she loved so much, she named him after her favorite shortening. Aunt Polly swore by that shortening when making her award-winning piecrusts. Alice’s mother says the piecrust recipe is worth millions and is anxious to get her hands on it. Apparently, other folks want it, too! So Alice does not relish going home from the lawyer’s office, where she has been called on her own for a reading of the will, to tell her mother that Aunt Polly left the piecrust recipe to Lardo, and she left Lardo to Alice. Alice’s mother is so furious she can barely even speak to the reporter who shows up wanting to know all about the piecrust recipe. In fact, everyone is too distracted to notice a mysterious green Chevrolet rolling through town with a driver whispering, “never again,” but odd things begin to happen. Aunt Polly’s pie shop is ransacked, then Lardo goes missing, only to reappear drugged. Alice is the only one who thinks the events are linked. With the help of a friend, she begins investigating.

The pace is sure and steady as the hijinks unfold, including a hilarious encounter between Alice and her first suspect, school principle Miss Gurke. As Alice digs deeper, she finds that people are not necessarily who they seem to be – especially that nosy reporter. But it is Alice’s mother who makes the biggest about-face, finally revealing her true talent and nature – all thanks to Aunt Polly and her generous will.